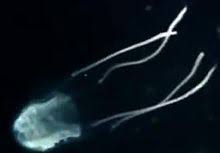 Box Jellyfish are one of the most dangerous sea creatures in the world. Even when they are dead they can still sting people. They are carnivores so they only eat meat like small fish. They live up to one year old and their size is ten ft long. They weigh up to 4.4 lbs.

The Box Jellyfish uses its venom to instantly stun or kill its prey and protect itself from predators. There are all sorts of Jellyfish and most of them are powerful but some are weak.

Some Jellyfish are washed up dead on beaches and people can stand on their stingers and can get really hurt and need to go to a hospital straight away.

Box Jellyfish live in warm coastal water. They are found in the Indo Pacific Region and Northern Australia.

About the Author: Kyrin Edge

Aloha my name is Kyrin Edge and I am 9 years old. My birthday is on January 13. And I live in Opuawhanga. My hobby is riding scooters and I have a friend who does tricks. My dad's name is Marty I have two other brothers named Connor and Braxton. Our school is called Whananaki. I have a dog named Star. When I grow up I'm going to be a professional scooter rider.