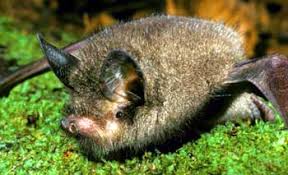 A lesser short-tailed bat is a small mammal like a mouse. It has a claw on each wing as well as its feet. It lives in forests and is endemic to NZ

It’s small and black brown like a little mouse. It has fur on its body, little front teeth, and small ears.

They eat seeds, bugs, spiders, worms, and beetles. They burrow under leaf litter to find their food.

They live in hollow trees or holes that they dig in rotten wood. In winter they hibernate for six to ten days at a time.

Baby bats are called pups. Pups take four to six weeks until they can fly. At eight-twelve weeks old they can look after themselves.

They are endangered because people brought animals such as stoats rodents and cats. These days short-tailed bats live on two offshore islands – Little Barrier Island and CodfishIsland.

I would like to see a lesser short-tailed bat to see how small they are and how they tuck their wings in and watch them walk on the forest floor.

About the Author: Teina C

Ki ora my name is Teina Caldwell and I live in Whananaki 1705 North road. I was born in Auckland Hospital in June on the sixth 2009. In my family, there are Kylie, Tamati, James/Dad, Karen/Mum and lucky last me and I’m ten years old. I love to ride Motorbikes and do wheelies and play with our two dogs. Their names are Bandit. He’s a boy and Lou she’s a girl. I also have a rainbow lorikeet. It’s a girl and her name is Rosie. Also, I go to Whananaki school with a great teacher. Her name is Miss McInnes. Most of the time I’m hassled and reminded to do my work. Anyway, I have a great school with lots of friends and swings - a basket swing and two casual ones. I like Whananaki school because we play Bullrush and lots of other things. When I grow up I’m going to be a builder and professional Basket Ballplayer. That’s all for today bye.