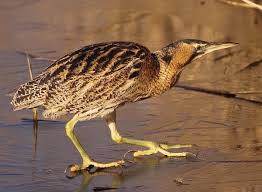 The Bittern is a rare and endangered bird that came from Australasia.

The females have a browner back than the male do and their wings are also brown. The male’s wings are both black with a white patch on each. They have brown and white striped feathers and a longish beak. Along with the beak they have quite a stretched neck too. Their wingspan is 100-130 cm long. They weigh 600 gm, and in length, they are 69 – 81 cm.

Bitterns eat small amphibians, like, frogs and salamander. Their diet also contains small mammals, worms, small snakes, insects, invertebrates and crayfish. When hunting their prey they stand stock still in the water and wait until their prey comes close enough to catch.

The Bitterns habitat is in New Zealand, Australia and lots of other places. They live in streams, wetlands, creeks and freshwater marshes with tall vegetation. Although they live in a lot of places their homeland is Australasia.

Bittern lay eggs not live babies. Their breeding season is all year except June and July. The egg-laying dates are August – December. The eggs are completely white all over. The 3 – 5 eggs are incubated by the female alone for 25 days. When hatched the chicks are small, light brown coloured and fluffy. The male bittern breed with up to five female in their lifetime.

I think bittern are amazing birds, and it’s very sad that they are an endangered species.

About the Author: Lily D

ABOUT THE AUTHOR Kia Ora my name is Lily Isabelle Dawson. I am nine years old and my birthday is the twenty fourth of November 2008. I was born in Auckland hospital on a stormy night. I have lots of hobbies! Horse riding, dancing, singing, art, reading, etc . I love all most all animals and can’t decide my absolute favourite one, though the top two are dogs and horses. I have two dogs Bella, a grumpy eleven year old blue heeler and Bessie, a cute 3 year old griffin, shitsu, dashound. My favourite of the two is Bessie who sleeps in my bed every night. I have three siblings all older than me. I have 2 sisters and a brother. Jayde my brother is the oldest, Jasmine the second then Yolanda the third. I live with my mum Karen and dad Aaron at 123 Paetawai road, which is off Hailles Road in Whananaki New Zealand. When I grow up I want to be a horse rider, a scientist, a teacher or a lawyer.