Do YOU have a wise-cracking Detective pet? I didn’t think so.  In the weekends I watched the masterpiece named Detective Pikachu by myself (As usual…) because I had just watched birdemic.(The worst movie to ever exist!) I went to the cinema because I thought I deserved a break… And I got greeted by the best movie I’ve seen in a long time! Detective Pikachu (Known as 探偵ピカチュウ or Tantei pikachū in Japanese) is the 18th movie in the Pokemon franchise and easily the best videogame movie of all time. But, if you’re going to watch this soon, I must warn you, there are major spoilers in this review.

The movie stars detective Pikachu, a lovable Pikachu with a detective hat and an addiction to coffee with a mystery to solve, and Tim Goodman, a lost boy looking for his father and determined to find out what happened to him. Along the way they meet a troublesome Mr Mime, a news reporter called Lucy, her Psyduck and none other than Mewtwo himself. The animation is incredible and although some Pokemon enter uncanny valley with their realistic counterparts Pikachu looks more alive than ever. The only problem with the movie is that its plot is a little complicated. 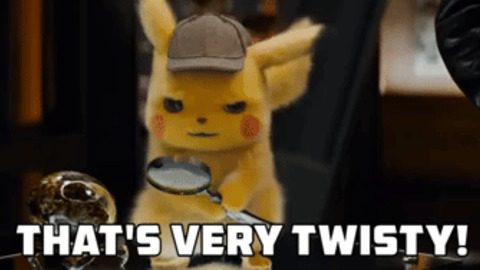 You see, The mayor of the city is the entire reason everything went wrong. After he miraculously captured Mewtwo his top scientists experiment with him but Pikachu fries their system and release Mewtwo. After a short chase, some Insane Greninjas destroy Harry Goodman, the father of Tim and the owner of Detective Pikachu. Mewtwo, however, transfers Harry’s soul into Pikachu, thus creating detective Pikachu and saving Harry in the process, but at the cost of wiping Harry’s mind. meanwhile, the mayor develops a purple gas that confuses Pokemon. While they are confused it is possible to enter the Pokemon’s body in the same way Harry entered Pikachu. The mayor takes control of Mewtwo but is defeated by Pikachu and launched into a building. Mewtwo becomes back in control of his body, kicks everyone out of their Pokemon’s body (Including Harry!) and that’s where the movie ends off. The Problem is the story keeps pointing towards the chance that Mewtwo and Pikachu where evil and working together, yet the movie somehow reveals how Mewtwo was good without making it extremely confusing, which somehow makes me confused…

All in all, after you see something like the incredible Bulk it’s nice to sit down and watch something with heart and soul put into it. I am Barbra duckmann, and this has been a movie review.

About the Author: James H

I am a year 7 student at whananaki school. I like drawing, Writing and publishing my work. I also can be found messing around on scratch and making models. Oh, and I love LUNCH!!!