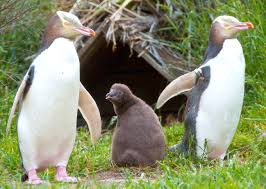 The Hoiho or yellow-eyed penguins are NZ endemic birds.

A Hoiho is tall but small. It grows 65 cm tall and weighs 5 to 6 kgs. Its eyes are bright yellow and it has a grey and whitish belly. They have a yellow ring around its eye.

Hoiho lay up to two eggs in rocks or huge bushes. Their breeding seasons are July June and May. When the female lays their eggs it’s mostly in October or September.

Hoiho live in coastal forests scrubs and flax bushes. They live mostly down in Stewart island and Southland and are spotted in the north of Otago and they only live in NZ nowhere else.

Hoiho eat a lot of fish and other things but there’s a couple that I do know and that’s opal fish silverside sprat red cod blue cod and some time squid and one I don’t know and that’s ahuru. They hunt for prey between 2-25km offshore and they are divers that go so close to the bottom and reach the depths of 40-120 metres

About the Author: Henare M

Hi, my name is Henare Mita-Waata and I live in NZ and was born in 2009. My birthday is on August the 2nd. I have one brother and one sister. Their names are Raima and Eruini and my 2 parents are called Adelle Rose and Hapeta. What I like to do is lie down and sleep while eating on the couch. I eat so much food but the only thing I won't eat would be vegies and the only thing I wouldn’t do would be work. I don't have a pet but there’s one pet I’ve always wanted and that's a turtle because I can make him be my spy at home. My hobby is playing rugby because I’m good at tackling and passing out to my team and I’m also good at basketball and I play for Whananaki. When I grow up I want to be an inventor to create robots and machines. So goodbye.