The kiwi is a native New Zealand bird. There are five different kinds of kiwi like brown kiwi, rowi, big spotted kiwi, little spotted kiwi and the other one I forgot. 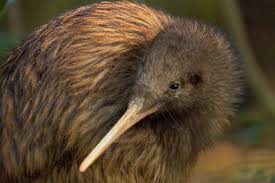 Kiwi are a smallish bird about the size of a domestic chicken. They are brown, fluffy but mostly shaggy. They have strong legs, nostrils, a long bill tiny wings and have no tail.

Kiwis breed baby kiwis by laying an egg then sitting on it for 16 to 20 days. They would prefer laying their eggs at night. They incubate their egg in burrows, hollow trees and logs.

Another fact I know is that their population is 68.000.

I think the kiwi is a great bird and I will make sure no one kills their population.

About the Author: Vance L

Hi, my name is Vance Bradford Lines and I am 9 years old. I live on a mountain called Onekainga I was born on June 3rd 2010. I ride a scooter and have a buddy named Kyrin who rides a scooter as well. I also do BMX. My favourite foods are sushi, tacos and other Mexican food. I have a brother named Zane a sister named Indigo my Mum is named Jill and my Dad is named Bill. I have three pets one of them is Bud Bud and he is 17 in human years. Gromit is 9 but is turning 10 in August. And finally, Nugget who is 6 years old in human years. And now my two Budgies one of them is named Bluey who is I think 2. And the other Budgie is named William Walter Wyatt Wilbur Weasley. I want to be a professional scooter rider when I grow up because scootering is fun. And that is all the information you need from me today so GOODBYE!!.