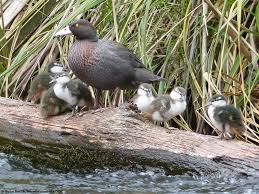 Whio are small ducks that are native to NZ. They are flightless.

Whio are blue and have webbed feet for faster swimming because they get their resources in the water. Whio have waterproof feathers so they don’t get wet while they hunt.  A Whio’s body can grow up to 54 cm long.

The Whio are very good swimmers hence the fact they live on boulders in the rapids. They also live in lakes and swamps.

Whio breed from late August to early September. Whio incubate their eggs for 35 days. The female Whio does the incubating while the male guards the nest.

The Whio’s diet mainly consists of larvae along with small aquatic invertebrates with a side of berries.

I hope Whio don’t become extinct because they are very good at being funny and they are an NZ bird.

About the Author: Seth Woodfield

Hello my name is Seth Frank Woodfield and I am 9 years old and I was born in Hikurangi on the 11th of March 2010 but now I live at 49 Hailes road Whananaki South. I have 4 siblings, 3 sisters and 1 brother. I am the middle child in my family my three sisters are Alena, Deltah and Lucy. My brother is called Joseph. My mother and father are Ruth and Raymond and my stepfather is called Israel. I very much enjoy playing Lego and Roblox and Minecraft. My favourite dinner is Butter chicken also my favourite lunch is sushi. I despise Fortnight and turkeys. The only hobby I can manage having is bike riding. I have a lot of pets: 2 rocks 1 named Rocko and 1 named Opal I also have 1 brick called Bricko and 30 chickens and 50 ducks. I don’t know what I want to do when I grow up but I want to move to Japan because I like the culture and sushi. I have other work to be doing so bye for now.